Back to the DX3S hack project, I got some time and took a look at the telemetry data. I didn't do any video, but the information below should be enough.

The telemetry data is fairly simple. On each 8 byte packet sent by the remote, the RF module responds with 8 bytes. Out of this 8 bytes, only bytes 3 and 4 are relevant.

Not long ago, I bought my second RC model (HPI Trophy Truggy 4.6 was the first): a Team Associated RC18R. Smaller, electric, perfect for indoor use. The problem is I only have a receiver for my DX3S.
Looking on the web, the cheapest receiver is about 150 RON (40-50$), which is almost the amount of money I gave for the small RC car. Also, the cheapest receiver has only 2 channels and no telemetry (RPM and battery voltage would be useful).

I had some problems regarding USB on the RPi + lapdock. I bought myself a Tp-Link TL-WN723N wireless (b/g/n) USB adapter to use it with my new "laptop". The problem was that it would not work with the lapdock connected at the same time. If I connected only the wireless dongle, it worked fine. Also, if I connected only the lapdock, it worked OK. When both of them were connected at the same time I got freezes and lots of kernel errors.

What is Raspberry Pi?
I don't think I can say it better than the official FAQ:


"The Raspberry Pi is a credit-card sized computer that plugs into your TV and a keyboard. It’s a capable little PC which can be used for many of the things that your desktop PC does, like spreadsheets, word-processing and games. It also plays high-definition video. We want to see it being used by kids all over the world to learn programming."

And I finally finished it.


Here is a video showing the functionality. I removed the sound but you can make an idea.

Leave your impressions below.

As I said, I started working on an ARM music player based on the EMX module from GHI Electronics.
Here is a short video showing where I am with the project. I will release the source code soon.

Please leave your comments below.

Posted by tatarandrei at 14:38 No comments:

I finally gave up on this project since I will continue developing it on an arm platform (based on the EMX module, will post a video soon).


I got it to the point where you could browse files from the device with the application on the android phone and selecting a file started playing it.


Also the ethernet part was working (I could listen radio stations) but you can only test it by changing code on the device (no implementation on the Android side).


So, here is the complete source code for the xmega and for the android device. The android project can be imported directly in Eclipse.

I was getting a little tired of the little 8 bit microcontrollers and all their limitations so I started searching for a new (powerful) platform. So, what to search for? Because I've worked in the past only with Atmel chips (with some few exceptions) I started looking on the Atmel site on the AVR32 and ARM solutions. After a little discussion with some other people, I decided to start working with ARM chips so I began searching for developing tools (debuggers, programmers, compilers) to see if this would be cost effective.
In my search I stumbled upon some great arm developing platforms from GHI Electronics that support .NET micro framework. I worked a little with .NET micro framework in the past (a very small project at school) and it seemed pretty great. Well, this modules are light years from great. You can event run unmanaged native code via RLP if you need real time capabilities and everything else you need is there, in the SDK. You can just start working on what you want to do.

As I previously said, I decided to give up the LCD screen with the touchscreen and move the control part to a mobile device (Android phone in this case), also adding a Bluetooth SPP module and a 2.5" IDE HDD as a storage unit.

I finished all the drivers and the integration of the TCP/IP stack (using the stack found here). Some problems need to be resolved with DHCP and DNS but until now it's all working fine. On the first try, I was using uIP stack but wasn't fast enough.

All the audio data is streamed to the audio decoder (VS1053) with the help of the DMAC (integrated in xmega192A3).

Also, will add a 32Kx8 SRAM chip that will keep one playlist (about 8100 entries in the playlist) on the device, so that it can work without a Bluetooth connection.

I'm now working on the Android application. I'll post some videos when I have a functional prototype. Until then, here are some pictures with the new Music Player. 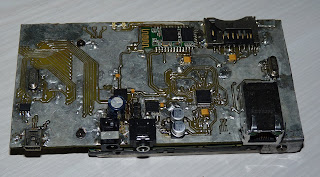 For any suggestions or questions, use the comment area below.

Posted by tatarandrei at 11:04 No comments: