Not long ago, I bought my second RC model (HPI Trophy Truggy 4.6 was the first): a Team Associated RC18R. Smaller, electric, perfect for indoor use. The problem is I only have a receiver for my DX3S.
Looking on the web, the cheapest receiver is about 150 RON (40-50$), which is almost the amount of money I gave for the small RC car. Also, the cheapest receiver has only 2 channels and no telemetry (RPM and battery voltage would be useful).

I was thinking to remove all the electronics inside the DX3S and replace it with my own. This way I could build my own receivers but have a good looking radio system.
The big downside is that this involves a lot of work. Not only writing the RF protocol, but also coding all the functions (expo, limits, trimming, corrections), UI, telemetry, timers, etc.
I took apart the DX3S and I noticed a small module between the antenna and the main board. It was obvious this was the RF module. It also had it's power written on it (@20 dBm).
After searching the internet for information about the module I decided to do a bit of reverse engineering.
Armed with a multimeter and a logic analyzer, I determined the used pins (which were power and which were input/output data). There are 4 data pins (3 output and 1 input) and 2 power pins (3.3V and GND). The logic analyzer immediately revealed the used protocol: SPI (350 kHz clock, 8 byte packets sent at about 5.3 ms).

Here are some pics with the inside of the DX3S, the pinout and a captured sample of the protocol: 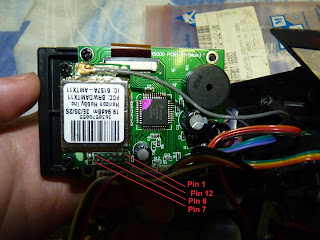 The main PCB with the RF module attached and my pinout 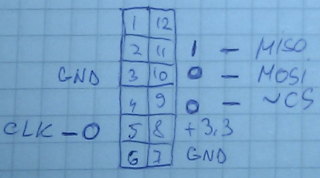 Each pin function. The rest are not connected.

With this protocol determined, I made a quick SPI to USB bridge from a dev board and a small program and here are the results:

Next step is to determine the format of the telemetry data (what the RF module responds to this packets).

After this, the RX/TX modules will be built around RFM22B modules (I already have all the needed parts).

If you have any questions or comments, feel free to put them below.

Update (16 April 2013):
I think the channel values are 12 bit wide and the first 4 bits sent for each channel contain a channel ID.
So throttle has the first 4 bits: 0000, steering has 0001 and AUX has 0010.
This is why the the steering has different limit values than the throttle but similar values with AUX channel (AUX channel has the LSB removed because I thought it's only for RS port).
Posted by tatarandrei at 09:45